The Marlin mine is a goldmine in Guatemala owned by Montana Exploradora de Guatemala, a subsidiary of Canadian company Goldcorp. The exploitation licence for the Marlin mine straddles the municipalities of San Miguel Ixtahuacán and Sipakapa, where local residents recall that company representatives had not been transparent about their plans for the mine, having originally told locals that they were looking for orchids, not silver and gold.

Resistance to the Marlin Mine and Resulting Criminalization of Dissent

In their essay on resistance to Goldcorp’s Marlin mine, Anabella Sibrián and Chris Van Der Borgh note a tendency to use legal concepts of “terrorism” and “illicit association” to further stigmatize land defenders while simultaneously criminalizing their actions. This tactic tends to be employed when resistance is growing or tending towards success. Below is a timeline highlighting land defenders’ resistance to the Marlin mine and the resulting stigmatization and criminalization of their actions.

The Scales of Injustice 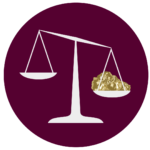 These cases demonstrate the partiality of the justice system and public armed forces, given the promptness with which they respond to the mining company, while complaints from local community members about violence or criminal behaviour related to the mine go ignored. Even in cases where complaints gained international recognition, this failed to make a significant difference locally.

Indigenous communities in the department of Quetzaltenango blocked mine equipment from traveling to the Marlin mine site after months of trying to get information rom the national government about mining projects. From December 02, 2004 until January 11, 2005, they stopped a large cylinder for the mine mill along the highway at Sololá.

▷ Some 1,000 police and military were brought in to repress the demonstration blocking the mining equipment. Demonstrator Raúl Castro was killed and some 20 other were injured as a result of the state’s violence reaction.

▷ Minister of the Interior, Carlos Vielman, publicly accused local Mayor Dominga Vásquez of having organized the protest, ordering her arrest and accusing her of “terrorism, sabotage, threats, injuries and damages to private property.” Another 15 people also faced legal proceedings as a result.

In the absence of any process of prior consultation to seek their consent, thirteen communities in the municipality of Sipakapa held plebiscites during which those who participated overwhelmingly voted against mining on their territory.

▷ The mining company, Montana Exploradora, sought a court injunction against the Municipality of Sipakapa a week before the vote, questioning the constitutionality of the process. This injunction was not granted.

▷ The company tried to obtain an injunction against the Human Rights Ombudsman of Guatemala for having issued a resolution declaring that Montana Exploradora had committed human rights violations. The injunction was denied.

Once the mine was in operation and in a context of increasing tension resulting from social division and other negative impacts of the mine, protests continued.

▷ In August 2007, seven people were arrested in connection with a confrontation between mine workers and residents earlier in the year. In December, five were absolved of charged and freed for lack of evidence, while two were fined and sentenced to two years of house arrest for crimes of coercion, instigation to commit a crime and causing injury.

▷ During this same year, opponents to the mine reported further violence, including a raid, two people being disappeared and the beheading of an activist, none of which were investigated further.

Local resident Gregoria Crisanta Pérez asked the mining company to remove a post that had been installed on her land for high power electrical lines to the mine. When her complaint went ignored for six months, on June 11th she short-circuited the power line, leaving the mine without power for several days.

▷ Montana Exploradora immediately filed a complaint with the Public Ministry and on June 14th, mine workers entered Pérez’s property accompanied by police and restored power to the mine.

Three days later, the District Attorney ordered the arrest of Grigoria Crisanta and seen other women from the community of Agel for the crime of aggravated usurpation. The complaint was expanded a day later to include accusations of inciting to commit a crime, threats against security services of a public utility and disobedience.

▷ By June 23rd, the National Police had an order to proceed with the arrests, which – while never executed – remained in place for four years. As a result of these warrants, Gregoria Crisanta and the other women experienced ongoing stress and anxiety as they faced tremendous stigmatization within their community.

▷ After a year-long campaign by the women’s organization Movimiento Tzununija, their arrest warrants were finally overturned on May 18, 2012. As part of the court decision, the company finally removed the post from Gregoria Crisanta’s property.

The Inter American Commission on Human Rights (IAHCR) issued precautionary measures for 18 Maya Mam communities in May 2010. The Commission issued orders designed to ensure the physical integrity, health and adequate water supplies of the communities, including the immediate suspension of the mine.The apparent likelihood that the mine would be shut down immediately aggravated tensions locally.

▷ In July 2010, Diodora Hernández Cinto was shot by two men with known connections to the mine, causing her to lose an eye.

▷ The perpetrators were never fully investigated, nor were IACHR’s orders ever fully applied.

▷ The government initiated a dialogue with municipal authorities, without any participation from those opposed to the mine, and was thus able to bring about a modification to the IACHR’s orders that dropped the suspension order a year and a half later.

Learn More About Criminalization of Dissent

Respond to direct calls for support from mining-affected communities and their allies.

Yesterday, indigenous youth from turtle island disrupted @JustinTrudeau speech with the constitution song, to remind him that Canada is on native and stolen land and climate leaders don’t build pipelines.[1] #cop15 #indigenousrights #LandBack