Over the last decade, CSIS and RCMP security reports, along with other government policy documents, have equated “economic interests” with Canada’s “national interests” and portrayed any group opposed to these interests as a threat to Canada’s security.

As early as 2002, in its first annual report tabled after the adoption of the ATA, CSIS warned that “…Canada is confronted by domestic terrorism issues related to aboriginal rights, white supremacists, national sovereignty, animal-rights and anti-globalization issues.” Since then, CSIS and RCMP security reports have consistently continued to identify animal rights activists, First Nation activists, environmentalists and anti-globalization activists as a domestic threat to Canada, but without identifying any specific organization until recently.

In January 2012, the Harper government launched a series of discursive attacks against specific environmental groups and foundations opposed to various resource development projects. Verbal attacks were supported by a new “anti-terrorism” policy statement, the release of security and intelligence reports, parliamentary committee hearings and other measures. These measures, considered as a whole, gave the impression of a concerted and systematic campaign aimed at discrediting, intimidating and delegitimizing opponents of the Northern Gateway pipeline project by labeling them a “national security” risk, portraying them as enemies of Canada’s “national interests” and associating them vaguely with “terrorism.” Never before had the link between corporate interest and “national interest” been expressed so clearly in the government’s discourse.

Between 2006 and 2015, the Conservative Harper government passed various neoliberal reforms to facilitate resource extraction in Canada and criminalize resistance. Most of these reforms have been retained by Justin Trudeau’s Liberal government.

▷ Expands the definition of what is considered a threat to the national security of Canada to include interference with the economic or financial stability of Canada, and interference with critical infrastructure.
▷ Empowers 17 government departments to exchange and collate information on individuals involved in political activities
▷ Expands CSIS’ mandate to include powers of disruption, including covert actions and tactics that violate the Canadian Charter of Rights and Freedom
▷ Lowers the threshold for making preventative arrests and obtaining a peace bond.
▷ Expands criteria to prevent an individual from boarding a plane without the need for a judicial warrant. 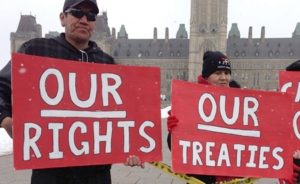 Natural Resources Canada has an official position of requiring Indigenous participation and consent in mining activities, but the realities have often proven these words to be empty.

▷ In 2007, a coalition of First Nations and settlers joined together to protest Frontenac Ventures’ Uranium exploration on rural land just north of Kingston, Ontario. For peacefully breaking an injunction to not interfere with the exploration, Bob Lovelace, former Chief of theArdoch Algonquin First Nation was sentenced to 6 months in jail and a $25,000 fine, while Co-chief Paula Sherman was fined $15,000 and the Ardoch were collectively fined $10,000.

▷ In 2009 Pacific Booker Minerals Inc. sued the Lake Babine Nation and Chief Betty Patrick for defamation because the Nation had published a news release on Oct. 14, 2008, announcing it’s withdrawal from discussions with Pacific Booker over its Morrison copper-gold project in British Columbia. The case was eventually thrown out of court, but at a cost of $90,000 to Chief Betty Patrick and the Lake Babine Nation.