Early in President Rafael Correa’s first mandate and while the 2008 constitution was being written, the question of whether or not Ecuador should pursue large scale mining at all was on the national table for debate. At that time, Canadian mining companies were the dominant players in Ecuador’s as of yet undeveloped mining industry, in which no mine project had gotten past the advanced exploration stage.

Canadian companies felt threatened by proposals being defended in the streets and debated at the National Constituent Assembly (NCA). In response, the Canadian Embassy in Quito “tirelessly” lobbied on behalf of Canadian mining companies to ensure a privileged seat for Canadian mining companies at the dialogue table concerning the new mining law and to ensure that their projects were not much affected by a decree to annul most mining concessions in the country.

Neoliberal reforms to Ecuador’s mining legislation were passed in 2000 with help from the World Bank. Similar to other parts of the region, these gave rise to a largely indiscriminate granting of mining concessions across large expanses of the Ecuadorian highlands and southern Amazonian region.

Stigmatization and Criminalization of Land Defenders

▷ By October 2008, weeks after Ecuadorians approved the new constitution, President Rafael Correa issued a public threat against anyone who questioned the national economic agenda and its heavy reliance on the extractive industry.
▷ The view he presented was that Indigenous, campesino and environmental organizations who protested a mining project were either being manipulated or were outright imposters, posers from the city, representatives of NGOs, or foreigners.
▷ He stated they would have to face the strong arm of the law for interrupting the country’s progress and for denying development to Ecuador’s poor majority.

Spotlight on Land Defence and the Mining Mandate

A national movement against large scale mining gathered momentum throughout 2007 and 2008, made hopeful by a profound shift away from extractivism during Correa’s first mandate. The movement united mining-affected communities from the highlands and the southern Amazon were resisting proposed mining projects at the local level. It is a result of their efforts that the prohibition of large-scale mining in Ecuador was considered by the National Constituent Assembly (NCA). In early 2008, the movement made important gains.

▷ In March 2008, the NCA granted amnesty to 357 community activists, recognizing that “men and women in our country have organized in defence of life, natural resources and the environment against companies that have devastated ecosystems; motivated by the lack of care and neglect, affected communities have carried out diverse actions of resistance and protest.” It acknowledged that charges brought against them were acts intended to repress their defence of “life with dignity and a healthy environment free of contamination.”

▷ In April 2008, the NCA issued the Mining Mandate, ordering the suspension of all large scale mining activities and the revocation of most mining concessions based on various criteria, including:
– lack of prior consultation with mining affected communities
– overlap with sources of water and natural protected areas
– additional criteria such as influence trafficking or companies holding title to more than three mining concessions

While the 2008 constitution was being written, the question of whether or not Ecuador should pursue large scale mining at all was on the national table for debate. Canadian companies felt threatened by proposals being defended in the streets and debated at the National Constituent Assembly (NCA).

In April 2008, and in response to popular movements against large-scale mining projects, the NCA issued the Mining Mandate, ordering the suspension of all large scale mining activities and the revocation of most mining concessions based on various criteria.

During this period, the Canadian Embassy in Quito had been lobbying tirelessly on behalf of Canadian mining companies to ensure that their projects were minimally affected by the new legislation. The Canadian lobby achieved a privileged seat for companies at the table, as well as assurances that at least five projects, all belonging to Canadian companies, would not have key concessions revoked.

▷ In August 2010, the Chinese consortium CRCC Tongguan acquired the Canadian exploration company Corriente Resources for $679 million CAD, and became the first company to sign an exploitation contract with the Ecuadorian government in March 2012. CRCC Tongguan has initiated construction at the Mirador mine in the province of Zamora Chinchipe in Ecuador’s southern Amazon in which both campesino and Shuar Indigenous communities are seriously affected.

▷ New state mining company ENAMI has prioritized work on Copper Mesa’s former Junín copper-molybdenum project, renamed Llurimagua, in the Intag valley where campesino communities have been opposed to large scale mining for nearly two decades. To facilitate exploration activities in this area of historic resistance, the community president of Junín was jailed in April 2014 on charges of rebellion and sabotage and a state of emergency was imposed through an overwhelming police presence in May 2014.

▷ Canadian company Kinross Gold was in contract negotiations for the large Fruta del Norte gold project in the southern Amazon. These broke down in 2012 based on shareholders’ dissatisfaction with Ecuadorian tax and royalty rates. Since then, however, Kinross continued lobbying for further reforms and in June 2013, without any pretense of prior consultation of Indigenous or any other organizations in Ecuador, the National Assembly passed industry-friendly reforms to the mining law. Among other things, companies will not have to pay a 70% windfall tax on mineral sales over a base commodity price until their initial investment is recovered and royalty payments will be capped at 8% on mineral sales. Kinross has since sold the Fruta del Norte project to Vancouver-based Lundin Gold, which is quickly putting in place the team and studies necessary to advance the project toward extraction. 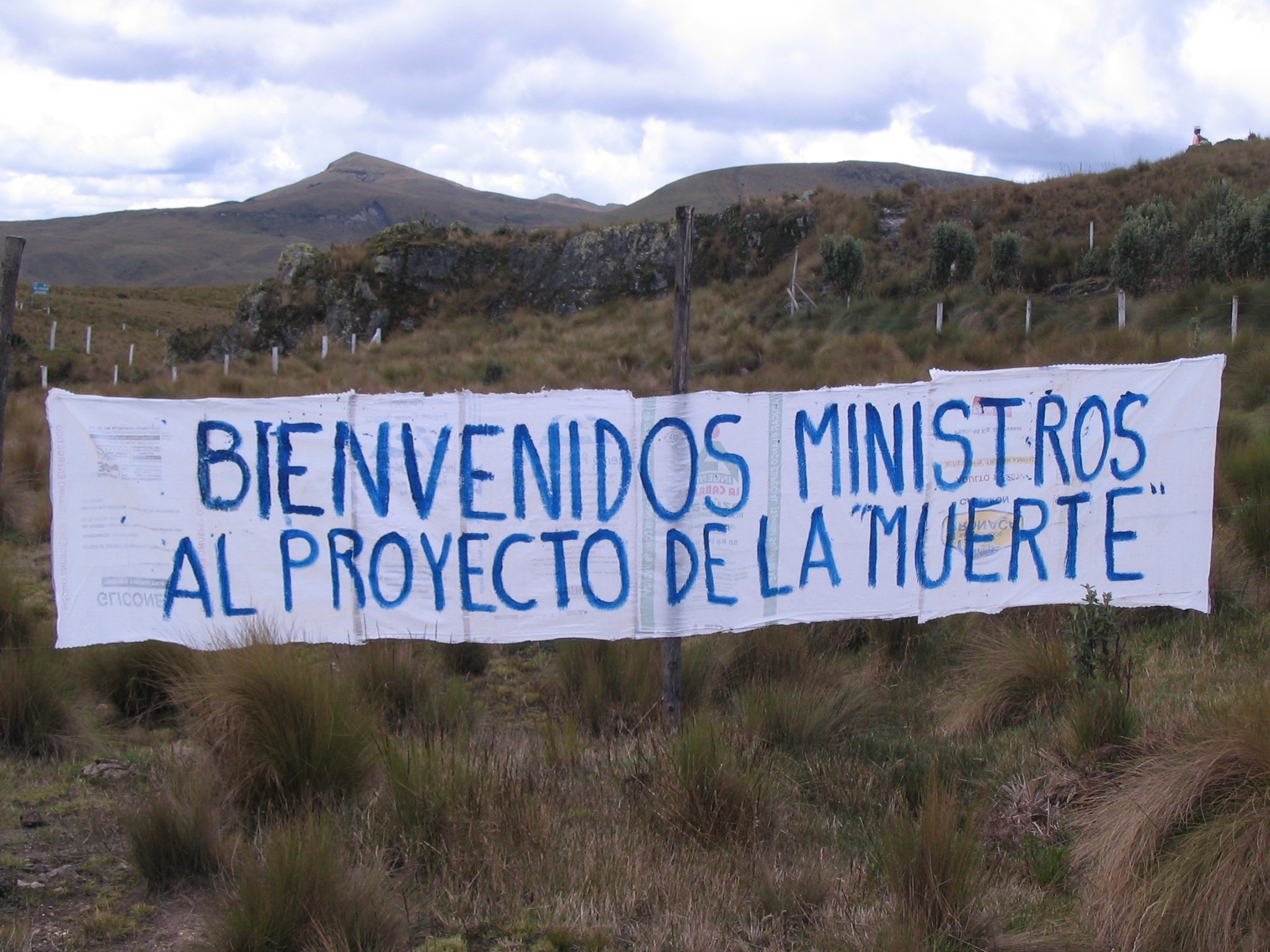 For nearly a decade, in the south central highlands of Ecuador, just south of the country’s third largest city of ...
Read More